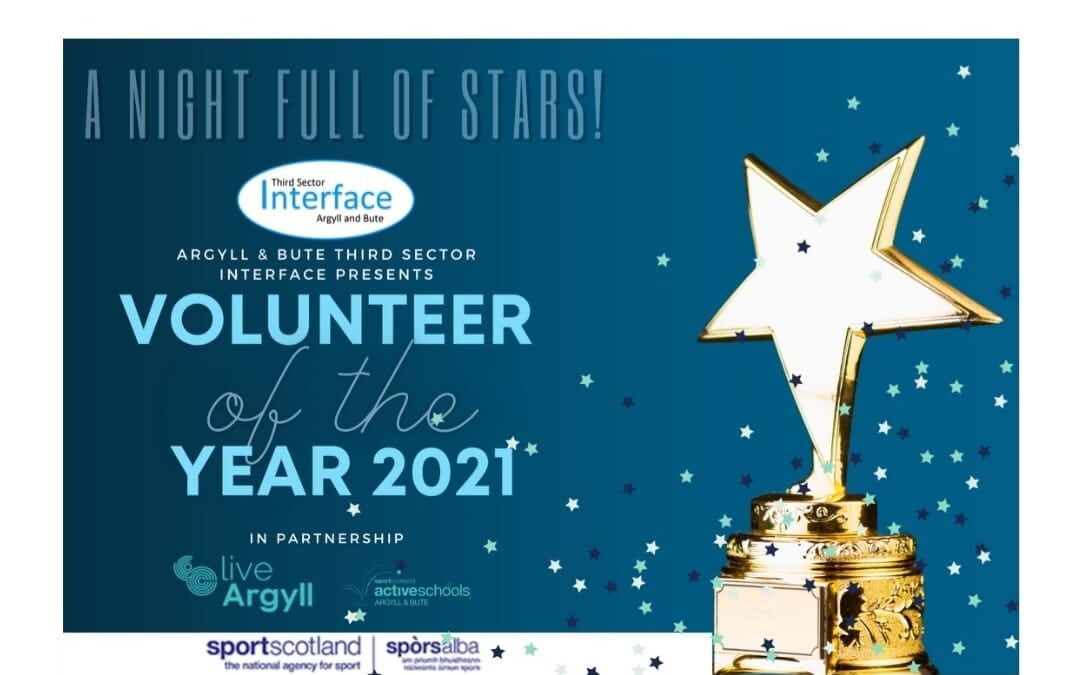 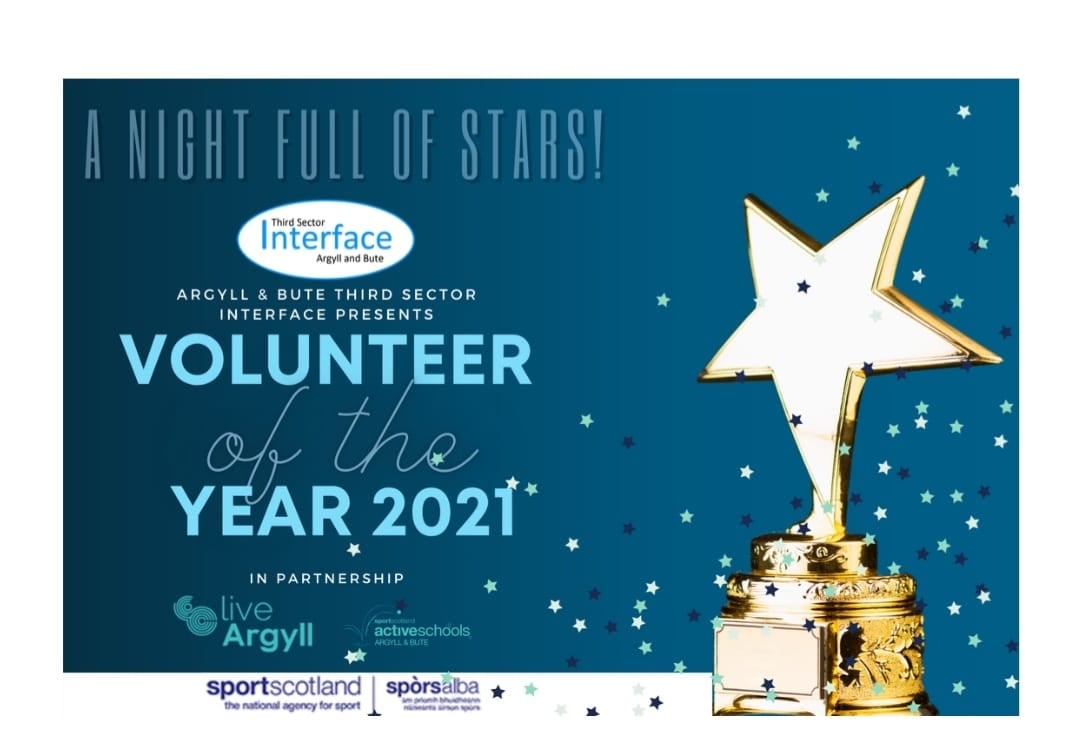 The LiveArgyll Volunteer Sports Awards, run annually in partnership with sportscotland, aim to celebrate and reward the success and achievements of coaches and volunteers in Argyll and Bute schools and community sports clubs. This year the awards were also run in conjunction with the new Argyll and Bute Third Sector Interface Volunteer Awards, with liveArgyll and sportscotland sponsoring 4 volunteer sports coach awards.

The nominees and winners were announced at the online ceremony held on Friday July 16th, which included interviews with members of the local volunteering community who spoke about what volunteering means to them. You can catch up and watch again here:

Volunteers put in hours of their time and are crucial to providing sport to our communities and families. We would like to celebrate and thank the dedication of all the volunteer coaches in our sporting communities, clubs and schools who make a positive difference in supporting their community live richer and more active lives. Read below to find out more about the volunteer coaches nominated in 2021!

To a volunteer in recognition of their contribution to sports clubs in their primary school (including virtual activity).  It is open to volunteers who were primary school pupils during the academic year 2020/21.

Faraid has been instrumental in galvanising Dunbeg Primary School to participate in the One Million Miles exercise initiative run by Adventure Oban. She has inspired and encouraged her school mates, many of whom are older than her, to contribute miles to the project and in turn motivated her teachers to renew commitment to school-wide activities such as the Mile-A-Day initiative.

Faraid’s attitude and determination has caused Dunbeg to set an example that many of the other local schools have subsequently followed. Because of Faraid’s hard work, schools like Lochnell, Taynuilt, Park and Easdale, among lots of others, have felt inspired and motivated to join together in communal exercise, as well as keeping active in their personal time outwith school.

In turn, this has inspired confidence in the young people that they then take home to their own families. There are many examples of families getting in touch with Adventure Oban enthusing about the merits of joint exercise and activity – these are all testimonials that Faraid has helped cause.

Young Sports Coach of the Year

In recognition of the volunteer coaches between ages of 12 and 25 for contribution to sport in the school, community or community club setting, whether virtually or in person having demonstrated their enthusiasm and commitment over the past year

Mark Findlay for his role as Junior Coach at Helensburgh Hockey Club. Mark was key to getting the children back to hockey as restrictions lifted and increasing club membership and coaches. He has also worked to bring the club up to date with an online membership system.

Ewan Gawthrope as a Young Ambassadors at Tobermory High School. Ewan helped to organise many house events around COVID restrictions, volunteered both in the school and outwith school at sports clubs and helped encourage younger pupils to engage and take part in sport.

For tackling the gap in coaching provision for the new girls in rugby at Oban High School. Together they have worked to double the playing numbers of young girls in Oban. They have committed to delivering sessions every week and organised and planned competitive matches, throughout the pandemic, managing it all within the strict COVID guidelines. These two have acted as ambassadors, role models and have proven to be an extremely effective coaches.

Volunteer Sports Coach of the Year

To a volunteer in recognition of their contribution to sport in the school, community or community club setting, whether virtually or in person. It is open to all volunteers over 25 who have demonstrated their enthusiasm and commitment over the past year.

Kirsten Barrett of Taekwondo & Kickboxing, for her continued commitment and coaching. In particular, volunteering during the pandemic providing free training to local community classes, ASN classes and charities all whilst studying for university.

Steven Mclaren of Helensburgh Martial Arts, for all his coaching work, continuing martial arts classes via Zoom during the pandemic and his dedication and belief he has shown to all students.

Rhia Edwards for coaching every Friday night and Saturday at Mull football club. Providing football opportunities for the children on Mull to take part in sport when restrictions allowed, all while working fulltime.

Stuart McGeachy of Campbeltown Running Club, for twice weekly training activities before during and after the lockdown period so that when the club was not allowed to meet members could continue to train on their own.

Leslie Kinvig of Oban Celtic Shinty Club, for working tirelessly to organise training, matches and sponsorship for the club, while also ensuring everyone’s safety during COVID. When schools were unable to provide shinty due to restrictions, Les stepped in. Les has given up his Tuesday and Thursday evenings and the majority of his Saturdays for the shinty club, around family and working full time.

Simon Kershaw Yates of Helensburgh Swimming Club for going above and beyond to run weekly fun and inclusive coaching sessions young swimmers, alongside his full time role in the Royal Navy, even dropping in to train swimmers when he was on home leave after time away. During the pandemic Simon ran land training sessions over Zoom, not just aiming to keep young people active but to help them stay mentally healthy and helping them to manage the ongoing changes by finding ways to relieve stress.

Community Sporting Heroes of the Year

These awards are for a coach, team, community group, community sports club or committee who has made a significant impact on or contribution to the development of sport/physical activity in the community. In particular by making sport more inclusive or by supporting their community to stay connected and active throughout the pandemic.

Helensburgh Amateur Swimming Club for their continued commitment to their swimming community during the pandemic. In particular, working towards SwimMark Plus accreditation to ensure their club were back in the pool as soon as restrictions allowed.

Loch Eck Orienteers for keeping their club and community connected and active during lockdown through an orienteering offering of virtual races and non-competitive courses, giving the community an outdoor sport to try alone, as a family or in their bubbles. The club was one of the first clubs in Argyll and Bute to return to competition after both lockdowns with record numbers of people of all ages signing up to take part in events

Oban Sailing Club Monday Mayhem Team for their work providing a non-competitive, inclusive and fun sailing session. Monday Mayhem sailing engages with families and visitors and brings a breadth of involvement to Oban Sailing Club, challenging the perceptions that sailing is an elitist sport.

Adventure Oban for breaking down barriers to taking part in outdoor physical activity and sport, especially during COVID. In particular, their community exercise initiative, One Million Miles, working closely with local clubs, schools and organisations as well as local people.

THANK YOU AND CONGRATULATIONS!

A huge thank you to everyone at the Argyll and Bute Third Sector Interface for organising such a great online event and for having liveArgyll sponsor the sports awards.